Ask US About AMSOIL!

This is our official AMSOIL Site - Sam & Ronda McGowan

the AMSOIL site for online ordering.

AMSOIL antifreeze is made with Propylene Glycol and is safe for children and pets. Go to the

AMSOIL's P.I. (Performance Improver) gasoline additive will save you money. While AMSOIL has had P.I. for years, the newest version is added to a full tank of gasoline every 4,000 miles or 100 hours of service. The additive cleans out the fuel lines and improves fuel economy considerably, with improvements of up to over 5%, with 2.3% as an average. 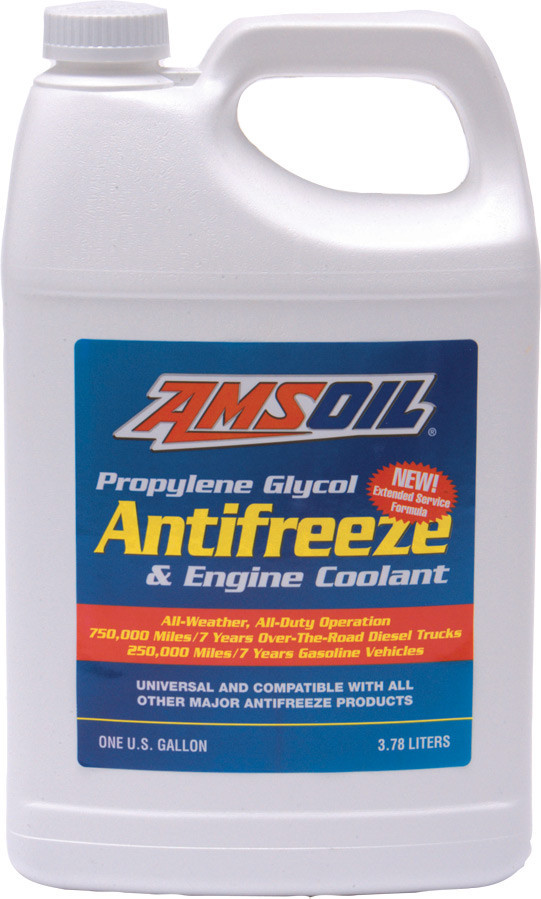 Force pilot Al Amatuzio in the 1960s and early 1970s. Sold only by independent dealers, AMSOIL synthetic lubricants and other products are the best money can buy for automotive, farm, home, trucking and industrial use. Originally marketed under the brand name AMZOIL, AMSOIL products have been available since 1972.  Synthetic lubricants can be made from a number of base fluids including hydrocarbon, vegetable and animal fats. The molecules are reconstructed during the refining process so that each molecule is uniform,  and thus a superior lubricant that reduces friction far more than conventional lubricants. AMSOIL engine oils include both full synthetics and blends.

That is the question millions of potential customers have asked over the past three decades. AMSOIL is the trademark name for a line of synthetic lubricants that were developed by  US Air

reasons - for one, synthetic lubricants are "built," meaning that each molecule is constructed and therefore is of a uniform shape. This

the impurities that cause conventional engine oil to become "dirty" in suspension, thus drastically increasing the life of the oil. AMSOIL

the same oil can be used indefinitely. Synthetic lubricants are also thermatically stable, meaning they are less affected by heat and cold

of the container than a petroleum-based oil with the same viscosity rating. This means that the lubricating system becomes effective much sooner in cold climates, while the higher summertime temperatures in warmer regions have less effect on the oil. Synthetic lubricants also

have a greater operational range - for example, ALL jet engines use synthetic oils for lubrication because petroleum-based lubricants are incapable of providing protection at the heat extremes found in turbine engines.

Why use synthetic lubricants when there are so many good quality conventional lubricants available at lower prices? There are several

synthetic engine oil is recommended for a drain interval of 25,000 miles or one year, and it if is used with a by-pass oil filteration system,

than conventional petroleum-based lubricants. Consequently, an engine oil that is rated as 10W-40 is much thinner when it is poured out

US Energy Dept. tests have determined that only about 20% of a gallon of gasoline is actually used to propel your vehicle. The other 80% is used to overcome friction either within the engine itself or in the drive train. By lubricating your engine, transmission, wheel bearings, etc. with high qualifty synthetic lubricants you may will increase the overall efficiency of your vehicle or piece of machinery and increase fuel economy while increasing it's life.

What About The Cost?

Aren't synthetic lubricants more expensive? That is the question most often asked by those who are considering the switch to synthetics. The answer is, yes the cost per quart is higher than that of petroleum-based oils.  However, this cost is offset considerably by the long-drain interval AND the often-considerable increase in fuel economy reduces the overall cost even more. When these factors are considered, synthetic lubricants

wagon. I had answered an ad by AMZOIL (as it was called then) dealer Ed Foster that was posted in TRADE-A-PLANE, a trading newspaper for

engines use synthetic lubricants. I was piqued. I signed up as a dealer and the first thing I did was put the oil in my personal vehicle. At the time I was living near Jackson, Tennessee and was driving to Memphis twice a week to attend college classes, so I had a good opportunity to check it out immediately. Before changing the oil, I determined that I was averaging 18 miles per gallon on a tank of gas. After switching to AMSOIL, my gas mileage IMMEDIATELY jumped to an unbelievable 24 miles per gallon, an increase of more than 25%! Needless to say, I was sold immediately.

Oh yes, indeed they do! And I can speak from personal experience in this regard. I first started using AMSOIL in 1976 in a Ford Pinto station

the aviation industry. Ed was looking for new dealers for a line of synthetic lubricants, and having a background in aviation and knowing that jet

Can everyone expect their gas mileage to jump six miles a gallon just by changing oil? The answer is no - a 25% increase from 10 miles per gallon

would be 2.5 MPG - but anyone will get SOME increase in fuel economy. Fuel economy can be increased even more in trucks, SUVS and other vehicles with manual tranmissions by changing to AMSOIL products throughout - engine oil, gear lube and grease. Some of the most drastic

increases have come in large over-the-road trucks when their transmission lubricants were replaced with AMSOIL gear lube. AMSOIL also offers synthetic automatic transmission fluid which offers the same benefits as other synthetic lubricants.

Where Can I Buy AMSOIL?

There is only one place to buy AMSOIL, and that is from an independent AMSOIL dealer - like us!. AMSOIL dealers can sell you the products directly, or can provide you with a catalogue from which you can order the products you wish direct from the factory with the convenience of a

Better yet, go straight to the AMSOIL store and place your order.

Can I Purchase AMSOIL Products at Wholesale Prices?

to purchase products at dealer prices, but who aren't interested in a dealership. Check our official web site for additional information.

Yes, you may, by paying a nominal fee and  becoming a registered dealer. AMSOIL also has a "Preferred Customer" program for those who wish

To become a dealer, one must be sponsored by another dealer. The registration cost is very modest, only $30.00 a year, and once a person becomes

become dealers because they recognize the business opportunity, many farmers, truckers and other customers decide to become registered dealers

so they can purchase the products at wholesale for their own use. Check our official site for additional info or Email us.

Can Anyone Become A Dealer?

a registered dealer, they may purchase products at dealer cost for resale or personal use and may sponsor others as dealers. Not only do people

Can I Sell AMSOIL Products in My Store? Can I Purchase AMSOIL To Use in my Commercial Equipment?

The answer is, yes you may. Complete the Set Up A Retail or Commercial Account Form on the AMSOIL site.

Can I Purchase AMSOIL at Wholesale Prices?

SEMcGowanJr@Gmail.com  and ask for an application.

While AMSOIL is a leading producer of synthetic lubricants, the company also markets certain selected automotive and lawn and garden products, including liquid fertilizer, lime and bonemeal. Click on the link to the AGGRAND Corporate web site to find out more.

To order online, go to our Offical Site - Sam &

link. Or, go straight to the AMSOIL Store.

For additional information and/or a free catalogue for telephone ordering, Email SEMcGowanJr@Gmail.com today!

Ronda McGowan or click on the AMSOIL corporate site

Ask how YOU can become an AMSOIL dealer, too.